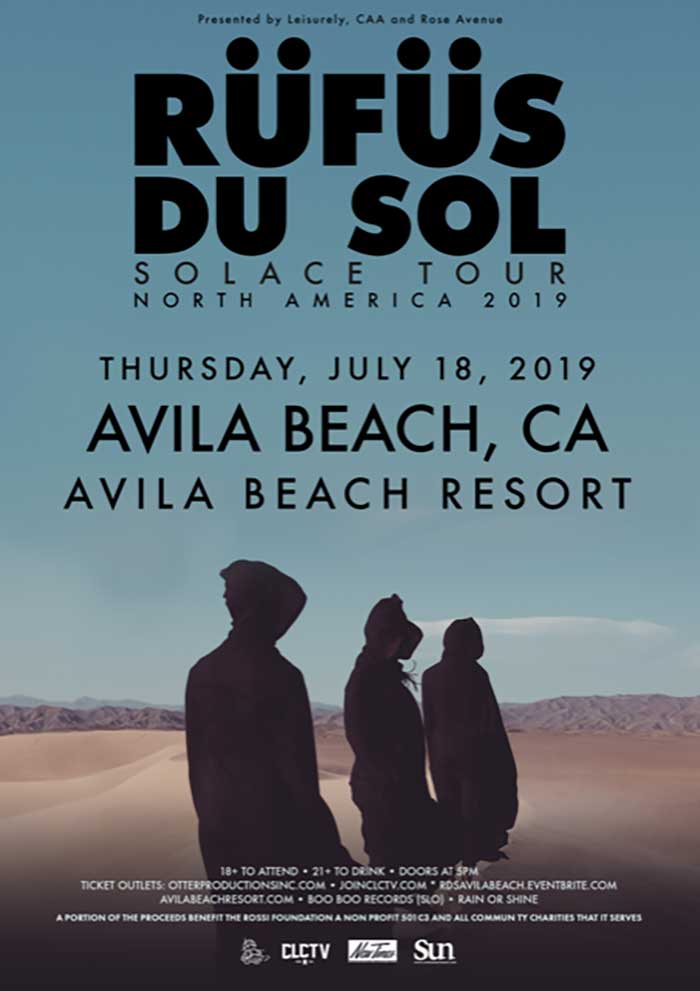 Some shows belong near the ocean and this is one of them! RÜFÜS DU SOL have emerged as one of the world’s preeminent live electronic acts. The Australian three-piece, comprised

Some shows belong near the ocean and this is one of them! RÜFÜS DU SOL have emerged as one of the world’s preeminent live electronic acts. The Australian three-piece, comprised of members Tyrone Lindqvist, Jon George and James Hunt, have released two platinum-certified albums, ATLAS and Bloom, with their newly unveiled third album Solace ushering in a new chapter for the trio.

Solace finds RÜFÜS DU SOL charting new territory, exploring deeper subgenres and more potent lyricism for an entirely new side to the group. “It’s about finding a sense of hope in a darker time,” the trio says. The album was born out of a particularly poignant period for the band and thus trackles heavier themes such as the pain of loss and the persistence of memory.

“We’ve been through a big process,” the group says. “Almost a year and a half of our lives. We put all our hearts into making this record.”

Accompanying the album, the trio have created a brand new live show which will push their on-stage abilities to new levels. Bringing a host of new analog gear into the fold, as well as a revamped visual setup, the new live show will bring the magical spontaneity of the group’s studio process to the stage in unprecedented format.

Copyright: Avila Beach Tourism Alliance 2018 - All Rights Reserved
Back To Top
×
X
We use cookies to ensure the best experience on our website, your continued use indicates your consent.OkPrivacy policy